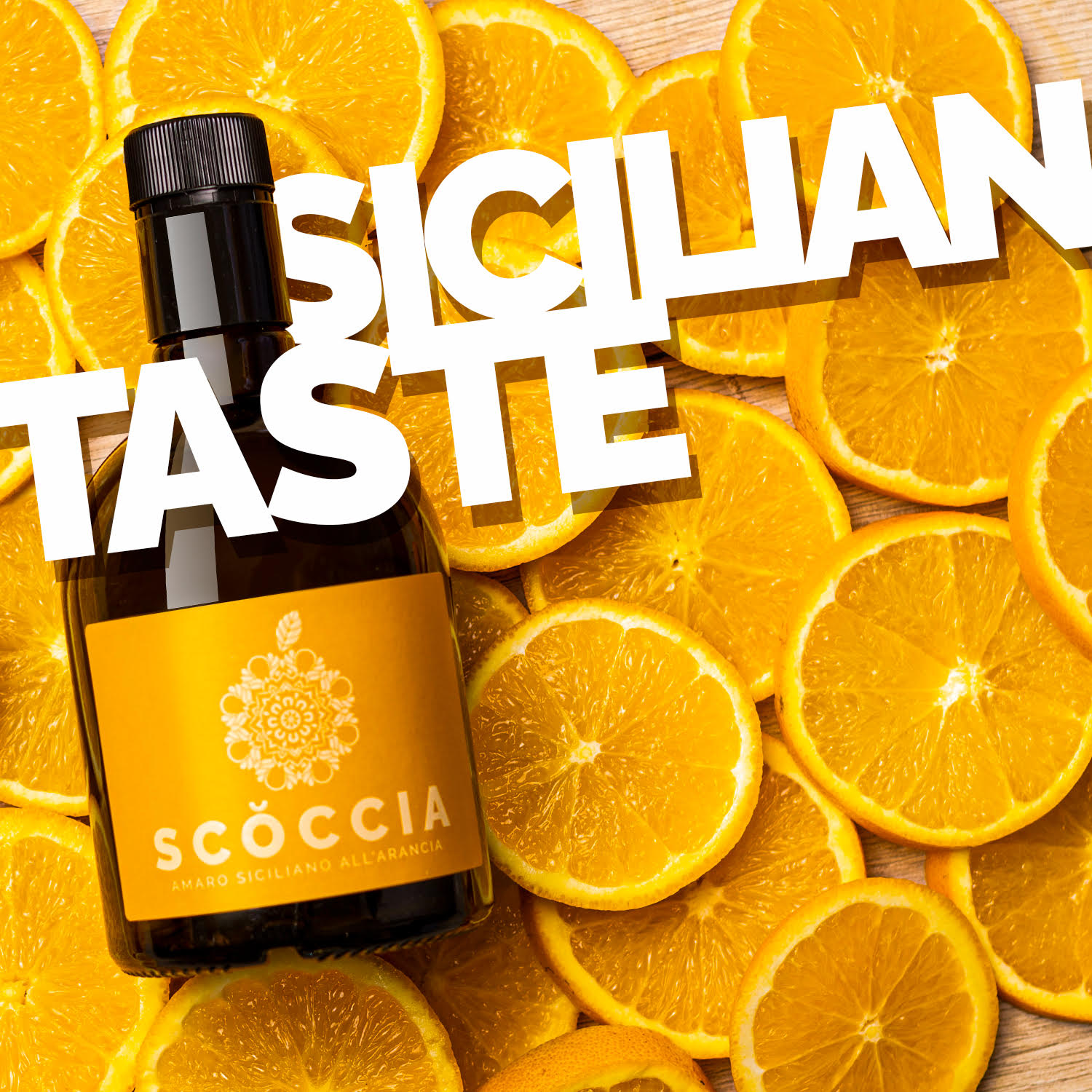 The telling of a magical story
The idea of the “scoccia” brand comes from an inspiration linked to the mysterious world of the mandala, and contains within it, through a sophisticated game of concentric figures, the orange blossom.
The spherical shape and the sunny color of Sicilian orange inspired our label: born from the combination of the passion of red and the radiance of yellow, expertly blended in a chromatic mix between the two perfectly balanced primary colors. The intersection of the fragrant concentric circles of orange blossom evokes the transition from flower to fruit, giving life to the orange, surmounted by its characteristic Mediterranean leaf.

The recipe for amaro scoccia has its roots in a past in which our ancestors cultivated orange groves in the plain of Catania by sharecropping.
Our grandparents tell of a secret recipe handed down by the Benedictine monks who, with painstaking perfection, created bitters and liqueurs according to an ancient infusion process handed down over the centuries by industrious Basilian monks who resided in a monastery most likely built towards the end of the 9th century. on the slopes of the volcano and subsequently inhabited by Benedictine monks.
The uncontaminated landscape in which the monastery stood, and the lush and fertile wooded area that surrounded it, meant that the orange-based recipe, which has come down to us today, was enriched with the flavors and aromas present on Etna, giving the bitter a unique taste in which the delicacy of the orange is combined with the strong notes of the lava soil.
To keep this tradition intact and preserve the smells and flavors of our territory we have followed the invisible thread of TIME which takes us back to our origins and to the land that our grandparents cultivated with devotion.
From this recipe comes a product with a round and persistent taste, characterized by the strong notes of bitter orange peel and bitter herbs, infused through innovative production processes that keep all the flavors and characteristics of the ingredients used unchanged.

The queen of Scoccia’s recipe is the bitter orange peel, or Citrus Aurantium, imported to Sicily after the year 1000 by the Arabs.
The stories about citrus fruits and their origins link the lands of the Far East to the Mediterranean: it seems that the fruit, also known as melangolo, was an ancient hybrid probably between pomelo and mandarin originally from Southeast Asia.
According to the most reliable historical reconstruction, it seems that thanks to the Islamic expansion in the Mediterranean, the Crusades and, finally, the discovery of America, this fruit has spread from the slopes of the Himalayas to California, passing through Sicily.
The fragrant peel of the freshly peeled bitter orange is full of notes that evoke the land of Sicily and is mainly used for the extraction of essential oils that also boast particular medicinal properties or for the preparation of alcoholic beverages.
The recipe handed down to us by our ancestors enriches the infusion of peel with a mix of fine, freshly picked bittering herbs that give the Amaro Scoccia an elegant, characteristic flavor that lingers in the mouth for a long time.